The next few days will be fast and furious. Arrival in London was fantastic, and directions that were received made getting to several destinations simple. After the swap from Southern Rail to the Tube Train at London Victoria Station, I arrived at “Mansion Station” 5 minutes early. Hopping off the Tube at Mansion Station, these are the first few pics…

Then a quick leap across the street and up a few floors to the spactacular view from a buddy’s office. Nice!

After grabbing a snack, we trekked around town for a few hours, just to get some bearings. The London Eye glows at night, but I’ll be returning for a close up daytime view later… 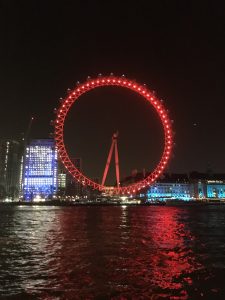 Most “shops” are small, and we passed by a few cool stands on the Thames River Walkway….like this one…

Then more wandering….  We passed The National Gallery, and into Trafalgar Square – which had a hustle and bustle. Good to know where the High Commission Of Canada was located.

We took the train back to the Chelsea area, and I started planning the day ahead.

….not necessarily in that order.