Another early start today, catching the circle line, transferring to the Bakerloo line north. A point of interest for those of you who have never been to London: Get an “Oyster Card” for transit. They cost £5 deposit for the card itself and are loadable and maxed out each day at about £10. If you have a card, transit is even cheaper when you use it. I thought about renting a small vehicle, but after the first half day, I’m so glad I didn’t waste my time.

So, hopped off the train at the “Maida Vale” station, and

walked for about 10 minutes to Abby Road Recording Studios! The Beatles, Pink Floyd, and many other successful bands did much of their album recording here. In addition, one of the most iconic Beatles photographs was taken here for their appropriately named album “Abby Road”. Several shots were taken by John Lennon’s photographer friend Iain Macmillan, with ideas from a sketch that a Paul McCartney made. Here is the album cover shot.

And here and here are other shots from that same day August 8th, 1969. 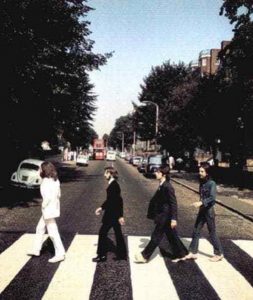 I guess they chose the right one….

Here’s a few that I took March 1st, 2019. The studio building is positioned on the right, just passed the crosswalk. I thought the statue at the corner was interesting, and I took a few different perspectives. There’s also a low wall and gate at the front. The graffiti definitely adds character, and they must think so too, as they haven’t cleaned off the many “signatures” from fans.

I wanted to check into the Hotel in Liverpool for around 6pm, so I had time for one more stop, and chose the Imperial War Museum. It was back in town, so I hopped on the Bakerloo South Line, and it took me right there. How convenient!

The entrance to the grounds was amazing!

It was nice to be reminded of the Canadian troops that came over to sacrifice their lives during WW2. I took a few pics, but I spent a couple of hours with the historic details.

After that experience, it was time to grab another Java, and bolt up to Liverpool. This time from Euston Station. It seemed like every station, whether it was a transit line or train line, it had amazing architecture and personality. I was impressed with every step taken.

The fast Virgin Train was about 2 hours to Liverpool, then a short taxi to the Hotel.

And, the surprise I was really looking forward to….

Here’s a picture of the boutique hotel I’m staying at. It was the family home of Stuart Sutcliffe when he was growing up, and was otherwise known as “The Fifth Beatle”. The story is that, as a good friend of John Lennon, he is known as the original bass player in the Beatles, but wasn’t very good, so he “mutually” left the band to pursue his artistic career, and became engaged to photographer Astrid Kirchherr. His teachers thought he was very intuitive and intelligent, but due to serious health complications he died on April 10th 1962 from a Cerebral Haemorrhage in Hamburg Germany. He was 22.

I’m sure there will be interesting stories about the hotel, but here’s the first picture of it upon arrival after the sun dissapeared.